The Miller Team has demonstrated the potential of this incredible space by working with talented filmakers to showcase the soul of the theater. This first production, created by Mark Albertin, tells the story of the Miller, and the evolution of a new entertainment district. It shows why this project is so vital for downtown Augusta. We particularly like the haunting violin of Micah Gangwer, SOA Associate Concertmaster, standing in the stairwell, stirring us with his music. This was the video shown to the early investors, encouraging them to consider this worthy endeavor.

The next production is by a well-known film artist by the name of Hodges Usry, a graduate of the Savannah College of Art and Design whose film career immediately took off with an impressive array of works. This first collaboration with Hodges is aptly titled The Miller Teaser video, and it entices you to enter the space. You feel as if you are standing there, feeling the slightly chilly air of the once-grand, long-abandoned masterpiece of Frank Miller.

Our next endeavor was to showcase the wide range of talent which will one day grace our stage. Hodges returns with music videos that evoke the spirit of the building that wants you to fall in love with it.  The first one features the warm and generous Celia Gary, delightful and gifted. You will see musical mastery juxtaposed with the coolness of winter inside an ambandoned theater. Our theater.

Celia Gary in the Miller Theater

Hodges next featured Bethany and Balducci, part of the well-known local group Delta Cane, demonstrating what two voices melting together really should sound like. Yes, it was that cold in the theater that day. Volunteers wore coats and mittens. Bethany is barefoot and her breath is visible. The energy and enthusiasm of all of the musicians who donated their time on that day of filming was a memory we will all hold dear.

Bethany and Balducci in the Miller Theater

Bethany and Balducci were so inspired by what it felt like to perform in the Miller, they convinced us to let them do ONE music video with the band in the space. The results are indeed impressive, especially because phenomenal music is paired with random images from within the theater. They perform the song “Silver and Daggers” with a strong bluegrass feel.

Hodges returns with the “Miller Music Revue” series, named in honor of the Revues done by Frank Miller in the glory days. The next one released is as compelling a video as you can see, an amazing feat that shows how talented Hodges is as a filmaker. When we watched it live on filming day, we thought there was no way he could capture the essense of the amazing Karen Gordon as she sings a capella. This one was an instant social media hit. Hodges knows how to let her be the star, with phenomenal shading and lighting to draw you into her song. You can’t help but love Karen.

Karen Gordon in the Miller Theater

Hodges next captured the vocal intensity of Phillip Lee Jr -which we love not only for the musician’s powerful talent but also for the wide shots showing the inspiring Miller stage. Watch Phillip’s face-he gives this performance his all, and it is impressive.

A video that is a sentimental favorite of our Marketing Co-Chair Angela Maskey was done by a group of inspiring Greenbrier high school students who used their passion for the building to send a message about the importance of saving the building. A Miller fundraising event was their senior project, and the videos were created to promote it. The event, held at the high school, took place after Peter Knox IV offered the Miller to SOA but before they had officially voted to accept it. Angela, not yet a member of the Miller team, was a mentor for one of the students (Katherine Bonner) and that night bought an 8′ original painting done by one of the students to showcase the Miller murals.

A photo of the painting, and links to their fun videos, are included here to show that this building inspires the love of young people who have no memory of a time when the theater was open. They just know it is a cool space, and it will be even cooler when it is back.

We Want the Miller Back 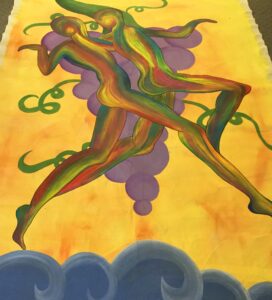 Stay tuned for more videos from the Miller Team, including additional works from Hodges Usry, and his Miller Music Revue. Subscribe to our Youtube page.